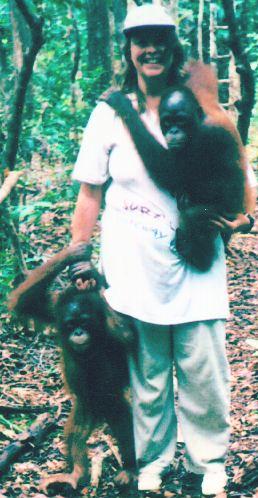 Composer Wendy Mae Chambers is best known for her large-scale events. These include MUSIC FOR CHOREOGRAPHED ROWBOATS with 24 musicians in rowboats oared by the Columbia University crew team at the Central Park Lake ('79), TEN GRAND for 10 grand pianos and laser lights at Lincoln Center Fountain Plaza ('83), THE GRAND HARP EVENT for 30 harps at the Cathedral of St. John the Divine ('84) and the inauguration of the Museum of Modern Art Sculpture Garden ('85), LIBERTY OVERTURE performed onboard the Brooklyn V, a 100-foot vessel, in the New York Harbor for the Statue of Liberty Centennial ('86), QUILL, for six harpsichords and surround-sound bird tapes, at Symphony Space ('87), SYMPHONY OF THE UNIVERSE for 100 timpani, metal percussion, horn soloist, jazz band, choir, organ, and tape at the Cathedral of St. John the Divine ('89) and A MASS FOR MASS TROMBONES (a requiem in memory of her father), for 77 trombones at the Cathedral of St. John the Divine ('93&'94) and Boulder, Co.('98). Her TWELVE SQUARED ('94) is a voodoo tone poem in memory of John Cage for 12 percussionists. She was commissioned by the Percussive Arts Society to compose MARIMBA! For 26 marimbas, performed at the Kennedy Center ('86) and commissioned by the New Wilderness Foundation to write a work for 30 trumpets for their Summer Solstice Event ('85). Her music is available on CD, including her A MASS FOR MASS TROMBONES, 10 GRAND, SYMPHONY OF THE UNIVERSE and TWELVE SQUARED. Her most recent large-scale piece is ANTARCTICA SUITE for solo piano ('99).

According to The New York Times, Ms. Chambers is possibly the world's foremost virtuoso of the toy piano. She has made a number of television and radio appearances on the toy piano including CNN and NPR. She is the inventor of the Car Horn Organ and just appeared on The Tonight Show with Jay Leno (Aug 2,'00). Other credits include two National Endowment for the Arts grants, an American Composers Forum Commission Grant and a CAPS grant (New York State). She founded Artmusic, Inc., which produced the above large-scale events as well as a television series titled VIDEOVILLE for five years. This was broadcast on WNYC-TV (a PBS affiliate in NYC) and on The Learning Channel, a national cable station. 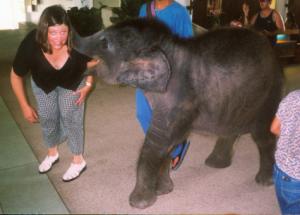 The New York State Council on the Arts, The Mary Flagler Cary Charitable Trust and the Copeland Fund funded these Artmusic projects. Ms. Chambers has a series of string pieces. She is an amateur violinist although the only person who appreciated her fiddling was John Cage, whom she worked with on a number of productions. She is an accomplished pianist. She is currently working on a series of musical Mandalas inspired by a trip to Tibet and an Endangered Species Song Cycle. Parts 1 & 2 are finished. Her musical, VOODOO ON THE BAYOU, is in the works.

Ms. Chambers is an avid oil painter, landscape/wildlife photographer and travelholic with a keen interest in ethnomusicology. She has a bachelor’s degree in music from Barnard College ('75) and studied piano with Kenneth Cooper. She received a master’s degree in composition from SUNY at Stony Brook ('77).